We had a great weekend planned.  Fly up to Edinburgh Friday evening, Adi run 10k Saturday morning, meet up with friends, nice food, a glass of wine or two, Paula run HM Sunday, cheer for Tara on her first Marathon, more friends, more food, more wine…. but it was not to be.

Easyjet flight 429 was cancelled and along with it our weekend away.

It started so well with a scenic drive to Bristol airport – we took a different route from usual, avoiding the horrors of the M5.  We had hand luggage for the first time, (deciding not pay the crazy money to check a bag)  so sailed through airport security and then to a restaurant for pre flight food and a drink or two.   We even got as far as going through the gate to board.

After hanging about a bit, a man looking suspiciously like the pilot, who was in fact…the pilot, came into the waiting area and spoke to everyone, informing us that the plane we were about to get on had just been struck by lightning on it’s approach into Bristol from Austria – some checks would be needed before we could board.  We saw them checking, with teeny tiny torches shone at the undercarriage, apparently they knew where the lightening had struck the plane but not where it had exited.  They were looking for loose rivets.

Time ticked by.  It was possible, they said, that we could take another aircraft on it’s way from Geneva, but in the end due to the storms it was diverted to Cardiff.

Roll on another hour and we hurled off to wait somewhere else, then finally, in a very Easyjet way they announced that the flight was cancelled and sorry for any inconvenience.  That was it.  No “We’ll get you on another flight” no “We’ll put you on a coach.”  Nothing.

There were actually a few flights cancelled and therefore hundreds of angry, upset, bewildered people milling around the airport not knowing what to do. Adi and I were pretty calm compared to others.  Long story short, there was no availability  on any other flight that weekend.  Possibly from London, in the morning, but as it was now 11pm and London was three hours away, and Adi’s race was at 9am his was not an option.  Plus my lovely pre flight drink meant I couldn’t drive anyway.  Easyjet mumbled about taxis and hotels but these all had to be paid for and claimed back…having now been on their website I’m glad I didn’t shell out any more money as claiming looks like the pain you would expect from a budget airline (in fact any airline).

As it happened we still ended up in a hotel in Bristol overnight, as I couldn’t drive and was too tired anyway.  We had the best laugh of the evening when we found that the bathroom in our hotel had a window!!!!  A window into the room – with no curtain.  In our tired and slightly delirious state we laughed our heads off.

So we had two bibs and no race.  Nothing for it but to run our own race…here at Crickleaze.   The Not the Edinburgh HM/10k  It would start at 8.30ish on Tuesday morning.  There would be a feed station, a supporter – Heidi and an official photographer – Ian.  And probably some cows and sheep. 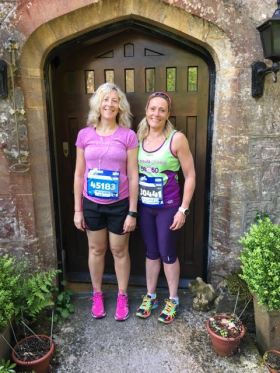 It was a casual start to the morning, quick photo by the front door,  a few snacks on a tray for the feed station and then a wander up the hill to the lane we would be running up and down.   I wanted to make it as flat as possible, hence the running up and down the same lane.  Everywhere else is pretty hilly.  We set off at 8.48….with a cheer from Official Photographer Ian.  Supporter Heidi was still in bed 🙂 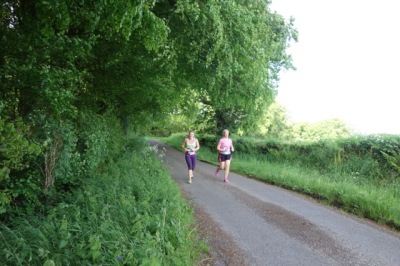 Adi trained for many weeks for this 10k with the aim of running every step – and that’s exactly what she did.  Up and down the lane three and half times made up the 10k.  She kept a great even pace and looked strong throughout.  It was great for me to have someone to chat to, we had decided not to wear our headphones and listen to music so that it would feel more like a race.  We had to dodge out of the way of a tractor and a dustcart, but living here in the middle of nowhere that was pretty much it.  Oh wait, I saw the postman too 🙂   Busy morning lol!

On lap two we spotted Supporter Heidi, wearing pyjama shorts and her wellies – but somehow still looking very cool.  She had our water bottles which was very welcome as it was starting to get quite warm.  Ian had popped back home to do some work but came back to see Adi cross the finish line in a PB of 1.06.15 and of course the Crickleaze 10k course record.

I had to keep running, still 11km to go for me.  Up the lane, down the lane, up the lane ….. Fortunately it was beautiful and somewhere I run all the time, just slower.  Today, because it was a race I kept up a good pace.

Saw Adi and Supporter Heidi a few times, with drinks and snacks and encouragement and before long it was over.

By this point Heidi had gone back to bed, good job she kept her Pj’s on, and Ian hadn’t realised how speedy I was so I crossed the finish line on my own.  Adi had walked up the lane earlier with water so wasn’t far away.  2.22.20 and a course record for the Crickleaze 21k 🙂

A great event, and although we missed Edinburgh it was good to know that my friend Sarah and Edinburgh were behind us all the way.