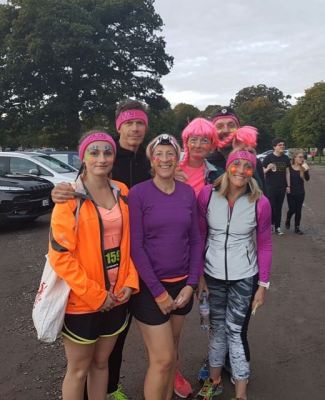 I think this is the first event this year that has really come under the “Fun Run” category. Not sure Ian thought it was much “fun” but more on that later…

No idea why I booked this as I already had an event booked for the same weekend on the Sunday, but I stumbled upon it while looking for something else and was seduced by an event with face paint lol!

The Glow in the Park was a 6km night  run at Longleat.  We really enjoyed the Maastricht night run on the Ironman weekend and we really love Longleat as a venue, having done many bike sportives from there, so it had all the right elements.

It was quite expensive for a 6km run but the tickets got cheaper the more you booked so I booked six and hoped to drag the family along….including Ian who thought he had got away with his one run event this year – parkrun at Coventry.  I skimmed over the “getting dress up in bright clothes and face paint” aspect and told him how nice it would be to run with his girls 🙂

As it happened one of his girls, Heidi, got a better offer for the night – a festival on the Isle of Wight but Zoe was still in and of course…me!!!  With Heidi’s place going spare we roped in my lovely neighbour Becky who, like me,  was totally seduced by the bright clothes and facepaint aspect, turns out she had the perfect outfit already in her wardrobe and a bright pink wig just hanging around…. not much chance to rock a pink wig where we live in rural Somerset, so this was her moment – she was in.

I had to be super organised for this event as we would be getting home late and I would be back out of the house again the next day at 6am for my next event.  So I spent Saturday preparing my run stuff for the Glow run and my swim and bike stuff for the Aquabike – I would be doing a disjointed triathlon with a sleep in the middle 🙂

At around 7pm on Saturday evening we all arrived at Longleat. Sister Adi and Brother in Law Antony were there too and Henry,  Zoe’s boyfriend had come along to cheer us on – if he could see us in the dark!  It was a beautiful evening, which we were very grateful for after waking up Saturday morning to heavy rain and strong winds.  Longleat House looked amazing as always…but there was already a totally different vibe to the bike events we have done there.  Loud music, flashing lights and, many many cars….I could see Ian’s face drop, this was not his thing at all – sorry Ian.  I was wondering if it was mine either.  We could see lots of people walking around in VERY bright outfits….many sporting pink tutus…including the men, and so much face paint.  I heard the announcer say there were 3500 people and it felt like it.

Becky is an artist which came in handy for our face painting – once parked up she set to work on us.  Ian kindly agreed to wear the pink headband, but face paint was a step too far.  The rest of us were covered in the stuff.

There was quite a bit of waiting around at the start….they wanted to wait until it was dark, so the start time of 19.30 was delayed until around 19.45 and then everyone was set off in waves.  With hindsight we should have pushed to the front but instead found ourselves pretty much at the back.  There was lots of jumping around to loud music and the MC revving everyone up.  Poor Ian was not enjoying this bit at all, but hopefully he would enjoy it once the running started.

Unfortunately with 3500 “fun” runners even after we started not much running happened.  The track was narrow, it was very dark and also quite hilly – we’ve cycled around here often and doesn’t seem as hilly on a bike – the undulations actually make it seem quite fast…..and the fact was, most people were walking and intended to walk the whole thing from the start.  It was a very jolly atmosphere though and it was lovely seeing people out having fun with their family members. Trouble was my family members wanted to run!

After a kilometre of shuffling along Zoe had other ideas and  scooted off with Ian, dodging and weaving between the walkers.  Adi and Antony were trying to do the same.  Becky and I tried to follow – which was challenging in the dark, but was actually quite fun.  Everyone had a torch and  the line of lights snaking between the trees did look very special.

Fortunately after a 2-3km it thinned out a bit….I think we had gradually made our way towards the front runners/walkers.  We finally had space to run.  Zoe was going at a good speed and Ian kept with her.  Adi and Ant also kept together.  Becky and I decided to experience some of the “fun” stations and lost sight of them.  The brightly lit stations were tents with various things in the them – foam or brightly coloured gloop – and loud music.  People were stopping to dance in them and get covered in stuff. 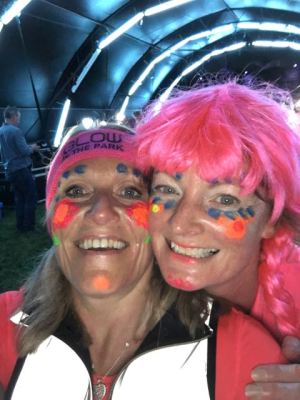 I was enjoying it and it was such fun to run with Becky, who normally would be too fast for me.  We chatted away and dodged between the walkers, up and down the little hills, on and off grass and tracks.   Trail running in the dark and with a great company.

As we neared the finish I could just about see Ian and Zoe in the distance but we couldn’t catch them.  The finish line was a blaze of lights and more booming loud music.  Henry was there to cheer us over the line.  We collected out finish certificate and met up with Adi and Antony.

It was not a fast 6km but I think we were faster than most because when we got back to the car park it was still completely full.  We didn’t hang around, the thought of queuing with a thousand cars didn’t appeal, so we dashed out and headed home.

It was good to do a different type of event and always good to hang out with my family….much better than a night in front of the TV, and it was fun to dress up and not care about the time it took. In the end I think Ian had a good time, he got to run with Zoe which he loved and of course he has a pink headband to keep forever 🙂