It’s getting near the end now and I’m getting a little weary, so I decided it would be good to do something fun.

A Santa Run, where everyone is dressed in identical Santa suits, sounded just the ticket.  Added bonus of being held in Plymouth where Zoe is at Uni.  This also meant she had no choice but to join in.  I also dragged my sister Adi and hubby Antony along too.  My poor family – I think they will all be glad when this year is over.

It was very cold when we left my house, -1C but it was a beautiful drive and once Adi had warmed up and her teeth had stopped chattering we had a lovely chat all the way to Plymouth.

We arrived at Zoe’s house at 10am and got into our Santa Suits.  Zoe had picked them up the day before.  They were huge – one size fits all and were obviously modelled on a 6ft, 20 stone man – hmmm maybe a bit like Santa.

Our kit consisted of a jacket, some trousers and belt, a jacket, a hat and a beard – Ho Ho Ho – instant transformation.

We wore as much as we could underneath, did I mention how cold it was… and headed off on the 20 minute walk to the start.

The start was at the shopping centre in the middle of Plymouth and it was quite a sight arriving and seeing 750 Santas all hanging around in the city centre. There were lots of kids too and they looked so cute in their small Santa suits.  Even saw a few dogs all dressed up.

There was a local film crew too and it was all very jolly. At 11am a lady who told us she was from the BBC counted us down 3 2 1 GO!!!  Within minutes we had gone from freezing cold to boiling hot.  Zoe pointed out how hard it must be to run a long race in fancy dress – and she was right, we were already struggling.  I had to keep adjusting my jacket, tug up my trousers and my beard was super scratchy.  My head was too hot with my hat on…Oh and my knee hurt!!  It’s been so good recently, maybe it was the cold.

It looked amazing seeing the crowd of Santas running down the high street – shoppers cheering us on.  It was three loops of the shopping area and even looped through the indoor shopping centre. 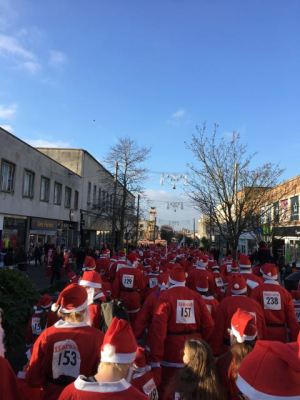 The distance was only 4km and I’m glad it was.  With my hurty knee and uncomfortable gear it was far enough. Zoe and I walked a few times just to cool down a bit but it was great fun running with her and Adi and Antony.

At the end of the 3rd lap we saw the finish line.  We were greeted with a medal and a mince pie.  Within minutes of stopping we were all cold again.   So we wandered back to Zoe’s in our Santa suits which were now looking slightly worse for wear.  They were definitely designed for one outing only.

Next stop Rotterdam for Event 50.